The Unconventional Secret to Motivation

Memento Mori.  Got one?

The ghouls and goblins are just beginning to emerge, so I thought I might ask if you have one? Memento Mori. Latin. Yes, it’s a thing. The google definition reads: “an object serving as a warning or reminder of death.”  Just a little something that acts as a reminder that you are going to die. Oh, how pleasant.

I’ve got one! Aren’t you jealous? This little black box is a vintage camera. It belonged to my husband’s grandmother, and it has been sitting on my shelf since she passed away some time ago. I left the little round tag hanging off the handle, written in her own hand, bearing the date: 1920.  I have been looking at it for years. I am dumbfounded by my sloth because it was only recently that I even bothered to ask, “I wonder if this thing still works?”. It does. Elated, I have begun to experiment with it.

The history of this camera will explain to you how this strange object became my Memento Mori. 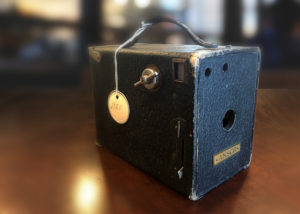 Before the invention of this revolutionary gadget, you had to go to a professional to get your family photos taken–a privilege reserved only for the wealthy. Before this camera, the only time an average family would have a picture taken was after someone had died. We may cringe at the thought now, but it was a very rational purchase then. Think about it. They had no other way to remember what the face of their loved one looked like. This kind of photo was called a Memento Mori.  For these photos, elaborate staging was required. They would dress the deceased in finery, prop them up, and comb their hair. Other members of the family would often pose with them as if everything was awesome. And unless someone told you, you might never know it wasn’t. (But, if you want to sleep tonight, I do not recommend that you perform a google search for Memento Mori photos. Because some of them are completely obvious.)

This camera revolutionized photography. It was the iPhone of the day. With the arrival of this affordable box camera came the ability for the average person to take candid photos of their loved ones while they were still alive. How pleasant.

The history of Memento Mori does not stop there. Down through the ages, the Memento Mori was thought to build character, and was not always considered a morbid thing.  In ancient Rome, it was popular to celebrate victorious military generals with elaborate parades. But Roman culture demanded that victory be accompanied with humility. So, a servant was hired to follow along behind the general to rain on his parade, reminding him, “Remember! You are only a man. You are going to die.” (What a wet blanket!)

Memento Mori is found across cultures, philosophies, and religions including Buddhism, Islam, and Christianity.  “Oh teach us to number our days, that we may apply our hearts to wisdom.” Psalm 90:12. Perhaps you have seen Victorian portraits of people adorned in feathered hats and elaborate costumes, holding a skull. That skull is Memento Mori.  And it’s not just an ancient thing.  Even in today’s culture, you can get an app called WeCroak for your smartphone that will send you messages up to 5X per day: “You’re going to die!” It’s funny. It’s cruel. And it is a reminder to get going.

Carpe Diem may be a more positive reminder, but it doesn’t look past today. It is the deadline that really gets us in gear. Think about it. If you have just been given six months to live, you have just been granted instant clarity. You know who you need to talk to, the things you need to do, and the things you need to fix. And often, when I need to make a difficult decision complete with risks and ramifications, I will ask myself, “If I died tomorrow, would I be glad I did this?” Most often, the question enables instant clarity. Sometimes, the best way to know what you were born to do, is to think about how you want that little obit to read–that little boiled down summary of your entire life fitting on one sheet of paper–when you die.

This, then, is the story of how this object, this camera, has become my Memento Mori. I have christened it so. This thing does mirror real life because there are precious few features you can control. But using what features it does have, believe it or not, you can get some decent shots. I screwed up the first roll of film. Even in that, it reminds me I can put in a new roll and try that shot again.

This camera, as my Memento Mori, is unconventional motivation to focus on what matters, and take care of what matters, while I am still quite alive.

What is your Memento Mori? We may never pass this way again. We aren’t here forever. Find something that will remind you to get going. All those Bucket List things you have been wanting to do? Give yourself a deadline. You still have time to do it. How do I know?

Simple. If you are reading this, you are not dead yet.